"It is an Ancient Mariner/And he ROCK!-eth one of three ..."


At over thirteen minutes this was, until recently, the longest song in Iron Maiden's repertoire. I'll confess I was never as big a Maiden fan as some of my schoolfriends (Powerslave was released in 1984 man! nineteen eighty four! over thirty years ago!), but there was no escaping them during my adolescence. And on this track they do the proper Sam 'Metal' Coleridge thing.

It's splendid, in its way:—I mean, as an example of its type. I can hardly say that without it sounding condescending, but I don't mean it like that. There are, of course, very evident differences between Coleridge's poem and this song, and not just in the trivial sense that 'the rock song' is a different mode to 'the poem'. Some rock songs capture the sense of a given poem pretty well, after all. This one, though, mismatches Coleridge's original almost completely. It is rapid (it is long, but it is still rapid), urgent, kinetic, driven. Like all Maiden's music it aspires to the condition of violence: noisy, punchy, thrashy, always plunging into the fray. Coleridge's poem is none of these things, with the possible exception of 'violent', and where that is concerned its mode of violence is radically different to Steve Harris's aesthetic understanding of the term. Coleridge is more interested in the obstacles to the mariner than in the mariner's progress; Maiden are more interested in the full-tilt hurtling on-and-on-and-on than in anything that might try to get in its way. Even the song's second section, its tempo slowed almost to languidness, is underlaid by an insistent march of guitar arpeggio triplets. We could put it this way: Iron Maiden, like all rock bands, work to the beat of the hammer on the anvil; Coleridge's poem works like the pull and draw of the oar in the water.

I'm not suggesting the Maiden version is prosodically simple. Actually, it's not. For one thing, this song is in four sections each marked by a different time signature: 4/4, 12/8, 16/8 and 2/4 (the song also varies markedly in tempo from section to section). And the time signature is only half the story. Take, for instance, the opening lines. Coleridge's original is an essentially iambic ballad meter modified with occasional extra unstressed syllables, for that 'Percy's Reliques' authentic roughness:


It is an ancient Mariner,
And he stoppeth one of three.
'By thy long beard and glittering eye,
Now wherefore stopp'st thou me?' [1-4]

The doubled-unstressed ending to 'mariner' in line 1 makes for an effective dying fall; where the doubled-unstressed 'and he' starting the next line is like somebody inserting an extra step in their stride to catch-up a more rapidly walking companion. Both together neatly, and understatedly, generate a sense of marine ebb and swell, something perfectly matching the larger logic of the poem. These oaring iambs run steadily through the whole poem, such that when Coleridge varies them, for instance by swapping out iambs for trochees ...


Swiftly, swiftly flew the ship,
Yet she sail'd softly too:
Sweetly, sweetly blew the breeze—
On me alone it blew. [461-4]

... he reverts directly back to a standard iambic trimeter in the alternating lines (twice, here) to anchor the divergence from the norm. Coleridge's metrical variations, in other words, are there not only to create the ambiance of an old English ballad, but also to generate a vibe of prosodic flow and eddy.

Iron Maiden's version of the same story is much more prosodically programmatic, driven by Nicko McBrain's bang-CRASH!-bang-CRASH! drumming. I notate the first section 4/4, but it could equally well be notated 2/4: a long string of short, rapid, repeated rhythmic elements aggregating into a solid piece of musical momentum. What's interesting is the way the melody and the lead guitar work against the grain of this base-four rhythm with a series of triplet guitar fills and a vocal line that re-casts Coleridge's original text into anapests:


Hear the rime of the ancient mariner
See his eye as he stops one of three
Mesmerises one of the wedding guests
Stay here and listen to the nightmares of the sea.

And the music plays on, as the bride passes by
Caught by his spell and the mariner tells his tale.

Driven south to the land of the snow and ice
To a place where nobody's been ...

and so on. It's a teachable moment, actually, prosodically-speaking. That first line, for instance, swaps out a spondee for one of its anapests, after the venerable Classical rules that permit such exchanges: 'Hĕar thĕ ríme // ŏf thĕ án // ciént má // ĭnĕr [X] // Sĕe hĭs éye // ăs hĕ stóps // ŏne ŏf thrée ...'  Looking at it written down, we might expect the first word, 'Hear', to be a stressed syllable; but when you listen you realise that's not the way Dickinson actually sings it. All this is underscored by the duh-duh-DUM-duh-duh-DUM galloping-anapestic rhythm laid down by Adrian Smith's Jackson Dinky.

What this does is counterpoint a basically (and rapidly) triadic melodic and musical pattern against a basically foresquare underlying beat, which in turn makes for a wealth of interesting rhythmic creative tensions and localised moments. Add in the positively albatrossic soaring-swooping Dave Murray solo (it begins at 9:15), and the various charming-ungainly grace-notes, such as Dickinson pronouncing 'shrives' wrong ('And the hermit shreeves the mariner of his sins') and we have a winner:


And the wedding guest's a sad and wiser man
And the tale goes on and on and on.

If there's a more serious point in amongst all this (and why can't we take rock and roll as serious, anyway?) it would be the larger contrast, something which points to two quite different aesthetics. We might put it this way: Coleridge's poetry, as poetry, is more death-drive, always looking for excuses to stop itself; Maiden's music, like all rock, is much more libido, always looking for excuses to keep thundering on. And on. And on.
Posted by Adam Roberts at 01:50 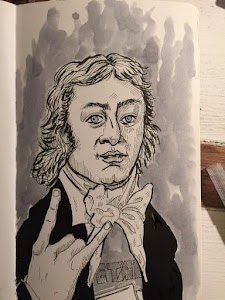 Adam Roberts
One of the most june men in all the Russias.